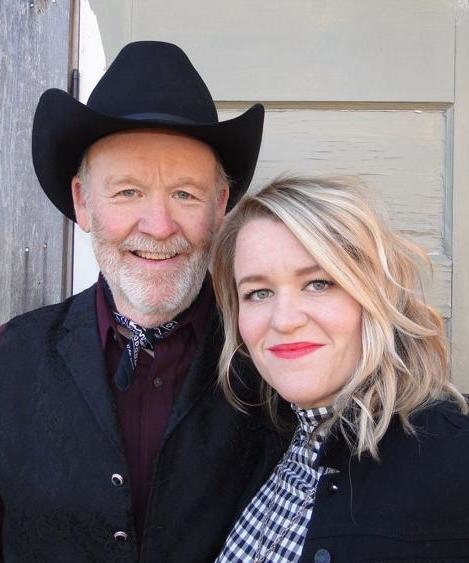 Join us for a Gimble Family Christmas! Dick and Emily Gimble will perform your favorite Christmas classics! Kayla Ray will open!

Dick Gimble was born into the musical family of Barbara and Johnny Gimble while his Dad was on the road with Bob Wills. He grew up with the beat of swing and the sound of the sweetest fiddle in country music.

Emily Gimble grew up with music in her blood, singing and playing on-stage since she was seven years old. Maybe it couldn’t be helped: when your dad is Dick Gimble, beloved guitarist and upright bass player, and your grandfather is Johnny Gimble, one of the most beloved fiddle players of all time (and the 2005 Texas State Musician), there’s really no choice but to play, is there?
Piano beckoned Emily early on—in fact, the Austin Music Awards named her “Best Keyboards” of the city four times (2013, 2014, 2018, & 2019)—as did another instrument, full of natural range and feeling: her voice. “A Case of the Gimbles,” the 2005 album she recorded with her father and grandfather, showcased her vocals and launched Emily on a national family tour, playing folk festivals and charming audiences across the country.
“The time I got to spend traveling around the country playing music with my Dad and Grandpa are the most cherished musical memories of my life,” says Emily. “It was then that I really started learning how to communicate through music, speaking with my dad and grandpa through solos and spaces on stage.”
It wasn’t long before other musicians started to take notice of Emily, including the Marshall Ford Band, where she romped on some western swing, and Warren Hood and the Goods, where she explored jazz, country, folk and pop. In 2012, that band started touring nationally, then went on the road the next year with Hayes Carll as his backing band. 2013 would also see the release of a record, “The Warren Hood Band,” produced by Charlie Sexton, and in 2014, Emily joined the iconic, GRAMMY Award-winning country band, Asleep at the Wheel. It was an opportunity that put Emily in touch with a lot of her heroes: nothing beats playing on “Austin City
Limits” (twice), except maybe for recording a duet with one of her idols, Merle Haggard.

Katie Shore –
Like many fiddlers, Katie was inspired at a young age by her Grandfather. At six years old she told her parents she wanted to “play music you can clap your hands and stomp your feet to”. Hailing from Ft. Worth “Cowtown”, Tx, Katie grew up playing in a world of strong fiddle traditions, attending fiddle contests, music camps such as Mark O’Connor’s and Johnny Gimble’s, and with some classical training, was part of the Ft Worth Youth Orchestra. After receiving an Associates Degree in Commercial Music in 2008, Katie moved to Austin, Tx. In addition to becoming a luthier and teacher, Katie leads her own project and has performed and collaborated with musicians including The Jitterbug Vipers, Continental Graffiti, Ghosts Along the Brazos, Willie Nelson and George Strait. Inspired by many styles and cultures, Katie’s voice and fiddle have taken her around the country and abroad. Currently the female vocalist and fiddle player for 9-time Grammy Award winning band, Asleep at the Wheel, Katie looks forward to every new adventure and opportunity to sing and play!